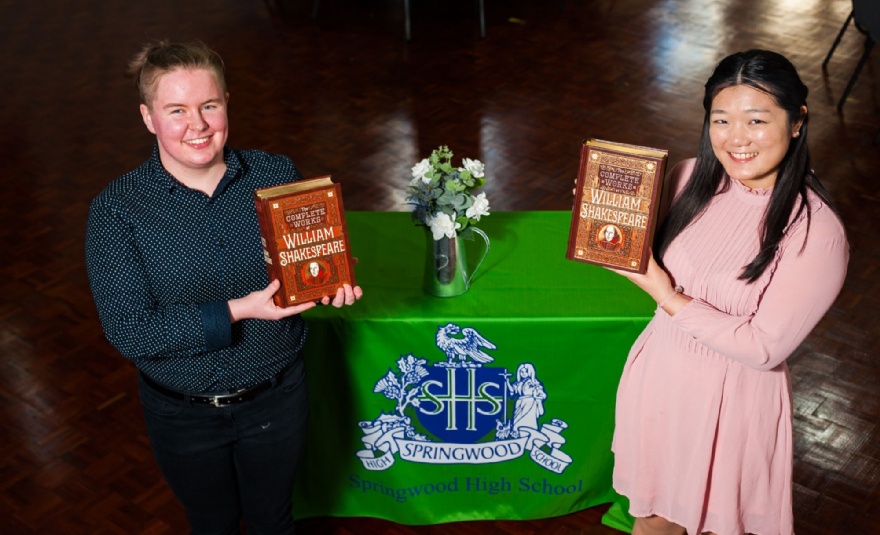 Two second-year university students have enjoyed a trip back to their schooldays to pick up a prize for outstanding exam results.

Rosie Huang and Joe Read both won the Queen’s Prize for being the best performing A-level students in 2020 at Springwood.

Usually the award is presented by the Queen at Sandringham House, but because of Covid restrictions the awards were instead given at the school - and a little bit later than usual.

The students were presented with a book of the complete works of Shakespeare for their prize at a tea party event, which was attended by their families.

Both spoke of their delight at going back to their former Sixth Form and getting the opportunity to chat to their teachers again.

Rosie who achieved 4 A*s in her A-Levels, said: “I remember I was told I won it just before summer last year -  I was shocked and really happy.

“Even when we were told we probably wouldn’t be able to meet the Queen because of lockdown, I was still really happy.

“It was really nice to go to the tea party and talk to all the teachers again.

“I wasn’t just there for Sixth Form, I was there for High School as well, so even though I hadn’t been there for a long time it was still quite familiar.”

Rosie, who is now studying computer science at Imperial College London, was accompanied at the presentation by her dad Jian Zhi, mum Yan Lan and brother Michael. Her older sister Michelle was unable to attend due to work.

“It was nice as you weren’t a high school student and you had to learn on your own - but at the same time it was more supportive than university.

“It is a good mixture and a really good transition to being someone who is more active in their own learning.”

They said: “It was almost better to have the presentation so long after, as it made it nicer to see my old teachers again and catchup with them for a chat, now it has been a little while since they were actually teaching me.”

Joe is now studying maths and philosophy at Oxford University - and future career plans might even include the possibility of returning to Springwood one day as a teacher.

They said: “Academia is something that is definitely on my mind - going on to do a PhD and then maybe staying in research, but teaching in general I am also quite interested in.

“If I finished uni, and said that’s enough of academia, I think I would quite enjoy high school teaching.

“When I left the head suggested I might come back at some point - that is definitely a thought.”