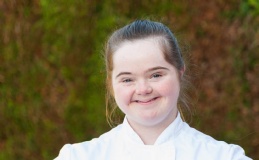 Would-be chef Lily Edwards has gone back to school to start her catering career after earning a food qualification certificate working in our kitchens.

Lily, from North Wootton, was the first pupil with Down's Syndrome at Springwood, and before she left the school in the summer, she was already getting work experience working in school catering and she has continued that work this academic year.

Although pandemic restrictions mean that she cannot currently go to the kitchens, Lily sat her first Royal Society for Public Health food safety exam and this week was told she passed with a score of 86 percent.

“Things like food safety are non-negotiable, so that exam is something Lily had to pass on her own merit,” said her father Paul. “It’s a huge deal for someone with Down’s Syndrome to do a written exam, so for her to have scored so highly is absolutely brilliant.

“Before she left, the school tried to set up an apprenticeship for her, but instead decided to give her two days a week of work experience in the kitchen, which would include on the job training for a vocational qualification, which has continued after school.

“Everybody at the school knew Lily, and they still know her now. She left the school with a plethora of qualifications – she’s a real Springwood success story.”

Lily, whose sister Lucy also went to Springwood and is currently working there as a trainee maths teacher, says her favourite kitchen activities are baking bread and fruit scones.

“I really like the school staff and also the staff in the kitchen,” she said. “I’d really like to carry on working in catering, especially here at the school.”