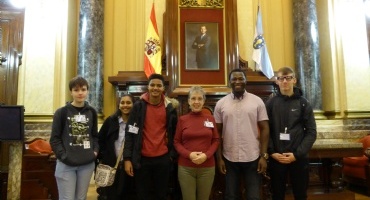 The Erasmus Team left the UK on 18th March  in the grip of a late winter with snow and ice all around, hoping for some warmer climes.

We were greeted with and a very warm welcome if not warm weather.  After the travelling we were all ready to head out for the host families and hotel to get a good night’s rest ready for the full agenda lined up for all the staff and students from countries around Europe (France, Germany, Greece and Italy as well as us and the hosts, Spain).

The younger students from the host school, La Grande Obra De Atocha, wanted to meet us and we were all bowled over by the welcome and their ability to greet us in our own languages.  All of the visiting students and staff were impressed by their singing and the guided tour of the school, which has students from the age of 4 – 18 years of age.

The students from the various countries began their work together, getting to know one another using English as the common language.

In the afternoon of the first full day, we were divided up into groups consisting of different countries and language abilities and had a guided tour of the old town/city with a competition of finding the answers to a list of questions.  Staff were not exempt and had to take part. I must admit that we were all pleased that we had left Britain in the snow as we were able to wrap up and stay relatively warm in the unseasonably cold weather.

The Mayor’s office and chamber was an impressive sight and the Mayor spoke eloquently of the links that bind us all as group of countries and young people.

One evening was giving to a cultural evening. We had all been asked to bring a typical dish/dessert. We took scones, butter and jam, as well as Bakewell tarts and apple pies.  Everyone had a great time sampling the various foods.  The highlight of the evening was the Headmistress lighting the traditional Gallician punch, the lights turned down and the story/poem of the witches and goblins read as the ladle was held aloft and the liquid allowed to fall back into the earthen punch bowl.

As the region is known as one of the places with strong links to the life of St Paul we were taken to Santiago de Compostela.  The group walked the last 7 kilometres of the pilgrimage route to the cathedral where St Paul’s remains are housed. There was no complaining by anyone about the walk even though the weather was still cold and blustery.

Each morning the students were engaged in a variety of activities and gave presentations on various subjects through the medium of English.  It was brilliant to see how well they all supported each other and how their language skills improved.  We also had a talk by a local business organisation that helps students, who may not have done so well at school, to obtain training in other countries which could lead to apprenticeships throughout the EU.  There is a local link in King’s Lynn, as well as Germany, France and Italy.

We took with us a gift for the school, which we presented to the Headmistress. When it was explained to her, that it was a pen and ink drawing of our local minster and that it was by one of our students, who has special educational needs, she immediately said that it would have pride of place in their special needs department to inspire the students there to show them what they might aspire to.

One of the afternoons activities was to walk to the Aquarium, where the students saw the feeding of the seals, met a 6 foot shark and a famous footballer from Ghana that plays for the local big team. That evening the Spanish students had arranged for their colleagues to visit the local interactive museum.

After the presentations on the renewable energies in each locality of the participating school it had been arranged that we should visit the working Roman lighthouse, the Tower of Hercules.  Unfortunately due to the weather conditions and an approaching storm it had been cancelled.  The following day we were to depart and some of the returning students and teachers had their flights cancelled or re-directed to Santiago.

The hosting families played their part and organised a leaving dinner for the students, which was very much appreciated by the visiting students, many of whom found the thought of leaving emotional.

All of the students, who have had the opportunity to take part in the Erasmus project, would like to thank the members of staff and students of all the countries for their generosity and support in making these trips possible. The inspiration and encouragement to aspire to greater things will be an on-going legacy.