Springwood pauses to remember the fallen

Students and staff at Springwood joined together to remember the fallen during Wednesday’s Armistice anniversary.

The sound of the Last Post echoed round our own Remembrance area where a flag was raised and a wreath was laid to commemorate those who never returned from war or conflict around the world.

Head students Campbell Pick and Neyah Laroiya represented the student body while Executive Head Andy Johnson laid the wreath. The flag was raised by Ben Carter and the Last Post was played by David Maddison.

This year’s Remembrance Day also held a special meaning for all the West Norfolk Academies Trust primary schools who held the memory of a West Norfolk World War Two veteran close to their hearts. 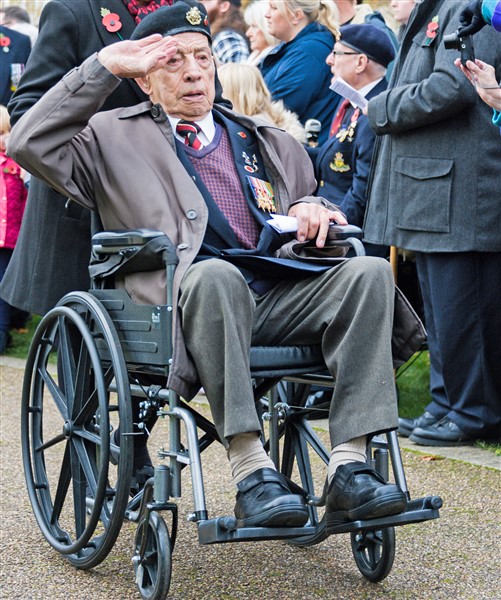 Cyril Route, a former Desert Rat and ardent supporter of the Royal British Legion, attended many services held by the Trust's our primary schools and following his death during the summer, this year’s event was named in his honour.

Mr Route died at the age of 96 and was a firm favourite at the services we held. His birthday often fell on the date of the service and he sat in the front row while pupils sang him ‘Happy Birthday’ as part of the Remembrance ceremony.

Mr Route, of North Lynn, became known as ‘The Poppy Man’ around the King’s Lynn area and he supported the annual appeal since the 1960s when he and his wife Joan would make the poppies and sell them door-to-door.

His army career started in 1941 when he joined the East Surrey Regiment in Africa and was part of the guard for Field Marshal Montgomery. He was a member of the Desert Rats and towards the end of the war he spent 104 days at the infamous Monte Cassino mountain campaign.