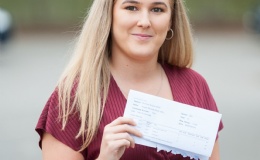 The academic stars of our class of 2020 may have moved on to the next stage of post-school life, but they have given us one more reason to smile, after it was confirmed that they had attained our highest-ever number of county scholars.

The award given out by Norfolk County Council recognises outstanding performances by students in A level or equivalent vocational courses.

This year, the revised A level grades meant we produced a record 73 high achievers, going on to destinations such as Oxford, Cambridge, Durham, Imperial College, and the Liverpool Institute for the Performing Arts, to study subjects including medicine, mechanical engineering, theoretical physics and songwriting and performance. Other students have gone on to take up apprenticeships and join the Royal Air Force.

Our executive head Andy Johnson said the high level of achievement was a great compliment to the standard of teaching at the school, and the quality of the pupils it produced.

“This academic year has been unlike anything any of us have experienced before, with the A level results confusion being one last twist in the tail,” he said.

“For so many students to come out of it with such flying colours is a huge testament to how they faced up to such a big challenge, and also how well the teaching staff handled it. Everyone associated with Springwood should be very proud of what they have achieved.”

Former pupils were quick to praise the teaching staff at Springwood for the help they had given them in such challenging times.

“Sometimes I think the teachers believed in me more than I believed in myself,” said Megan Tarry, who scored two A*s and an A to win a place at Durham to study Maths. “I don’t know if I’d have made it without them. They saw my potential and made me work hard.”

Last year’s head boy Will Coade, who is now studying at the Liverpool Institute for the Performing Arts, said the level of personal support offered had made a real difference.

“Whenever I was going off to an audition, they were really interested to hear how things were going,” he said. “The school I was at before was much smaller than Springwood but I always felt all the staff here really had time for you and were very approachable.”

Alvin Jaison, who is studying medicine at University College London, said the school reinforced his ambition for what he wanted to do.

“The staff helped a lot and gave me opportunities which encouraged me,” he said. “That really strengthens your mindset for what you want to do in the future, and some of the teachers are absolutely brilliant. Across the school, the standard of teaching is very high.”

Alice Lenton, who will take a gap year before studying nursing, said the support of staff in such strange times had made a huge difference.

“There were times when I thought it might not be possible to get where I wanted, but they kept me going,” she said. “It was a very uncertain time, but they always kept us in the loop if we were ever unsure about anything and tried to keep us informed.”

Rosie Huang, who is studying computing at Imperial College, also praised the difference made by the teachers’ calmness in such unpredictable times. “Just before shut down, they were so helpful,” she said. “We talked about what was on our minds, and they listened and helped, and they were always contactable.”

Abbie Copping is another high flyer, off to Durham to study Law. She said the staff created an atmosphere of excellence and ambition in the school. “They encourage you to as much as you can, and seeing everyone else doing that makes you want to do well as well,” she said.

Abi Rice, who is studying midwifery at Nottingham, said the school encouraged students to stretch themselves and be the best they could.

“They expect the best of you, give you all the information you possibly need and really encourage you to do extra-curricular activities,” she said.

“It was a desperately confusing time for everyone, including the teachers, but they did a great job being as reassuring as they could, and providing whatever support we needed.”