GCE Presentation Evening - The Class of 2017 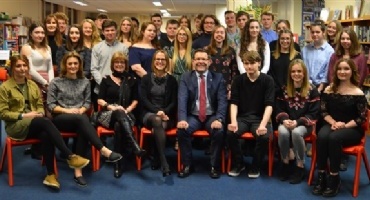 Students returned from their various universities and apprenticeships to collect their A Level certificates from guest speaker, Fiona Gray.  Fiona, a former Springwood sixth former herself, now runs a translation company that she created herself, gave an inspirational talk about her journey from sixth former, to university student, to translator to being an entrepreneur and company director.  Fiona used her own experiences to advise students to pursue careers that  they genuinely love as well as suggesting that students should not be afraid to take risks and step out of heir comfort zones.

A range of special awards were also presented, many of which were kindly sponsored by local businesses.  The evening also included a talk by Amanda Arterton, on behalf of West Norfolk Academies Trust, and remarks on the cohort by Executive Headteacher Andy Johnson.

The evening was closed by Hollie Nelson who thanked Fiona for her talk, the school for its support of the students and the parents for their guidance throughout the students' time at Springwood.